The climate and hydrology data we hold enable scientists to better model the effects of climate change on the environment, which informs decision makers on issues such as river flow and flood events in Great Britain.

A collection of datasets held by the EDS are being used to explore how different characteristics (such as human influences) control how rivers behave and how this varies across Great Britain.

The impact of these data resources has been wide-ranging, with articles citing them receiving thousands of views and downloads. Curation of these data by the EDS has enabled researchers to find, access and reuse them in new ways, provided researchers with the tools to better understand the impacts of climate change on a national scale.

A unique resource for environmental scientists

The NERC Environmental Data Service (EDS) hosts a number of climate datasets which show how a range of climatic variables have changed, both spatially and temporally, from 1961 to 2017. These datasets together form the Climate Hydrology and Ecology research Support System (CHESS), a collection of high-resolution gridded datasets for environmental research.

Access to these data enables scientists to better model the effects of climate change on the environment. The results can be used to inform decision makers about the impacts of climate change on river flows, water quality, insect-borne diseases, bird populations and drought and flood events in Great Britain, thereby allowing them to mitigate the effects of, for example, flood events, on the general population.

CHESS provides 1km resolution gridded data for Great Britain for various meteorological and land state parameters (e.g. Potential Evapotranspiration (PET), surface water, and energy and carbon fluxes) from 1961 to 2017. The meteorological variables are derived from historical station observations, via downscaling of the Met Office’s MORECS 40 km meteorological data set and the UKCEH Gridded estimates of daily and monthly areal rainfall for the United Kingdom (CEH-GEAR) dataset, while the land surface states are outputs of the Joint UK Land Environment Simulator (JULES), a core component of the Met Office's modelling infrastructure and a major part of the UK's contribution to global model intercomparison projects (e.g. CMIP6). These data are freely available from the NERC EDS and are often used together with other datasets held by the EDS, such as the UKCEH Gridded estimates of hourly rainfall for Great Britain (GEAR1hr) dataset, to drive models including JULES.

“We were very pleased to be able to use this data. It enabled us to progress much faster in our research on groundwater processes in the Thames region.” Dr Nataliya le Vine of Imperial College, London.

“The use of the CHESS data was crucial in developing our science on the efficiency of heat pumps across the UK. It represents a unique resource for UK environmental scientists.” Professor Anne Verhoef of Reading University.

Researchers at the University of Bristol, UK Centre for Ecology & Hydrology (UK CEH), British Geological Survey (BGS) and University of Exeter have used the CHESS datasets to develop a new resource, which has been published by NERC EDS called: Catchment Attributes and Meteorology for Large-sample Studies (CAMELS-GB). 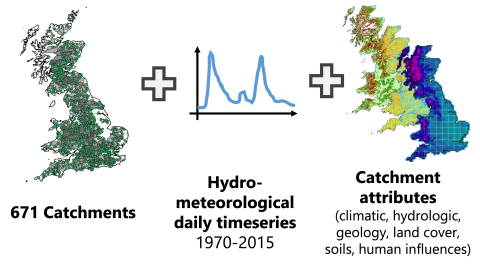 Researchers from the British Geological Survey and the University of Bristol have published a paper describing how the data were used to assess the impact of water resource management practices on baseflow, a critical component of river flow and important water resource.

“The CAMELS-GB dataset, for the first time, brings together key catchment hydrological metrics and indices with quantitative data on water management practices for GB. This has enabled us to begin to unpick the effects of practices such as groundwater abstraction from natural variability on baseflow characteristics of streams.” Dr John Bloomfield, Groundwater Resources Topic Lead at the British Geological Survey.

Researchers from the Universities of Oxford and Bristol and the UK Centre for Ecology & Hydrology (UK CEH) have also used the CAMELS-GB data to train and test various rainfall run-off models in Great Britain providing a reference for future hydrological modelling efforts. The latter study has been viewed and downloaded globally over 12,000 times (as of Nov 2021).

The CHESS datasets, held by the EDS, have been cited in a number of journal publications led by the University of Oxford, the Met Office, Reading and Leipzig Universities and UKCEH, receiving over 8500 downloads and views between them (as of November 2021). The CAMELS-GB dataset, created as a result of reusing the CHESS data is also the focus of a data paper in Earth System Science Data – a high profile, high impact, open access data journal. Since being published in October 2020, this paper has received over 4000 views and downloads and 15 citations, which demonstrates the wide impact these datasets have on the climate and hydrology research community and beyond.

By making these environmental change datasets openly accessible, NERC EDS has enabled researchers to find, access and reuse data in new ways.  For example, their subsequent analysis has provided us with the tools to better understand the impacts of climate change on a national scale.